Matthijs van Wolferen, LL.M., is Ph.D. candidate at the Faculty of Law of the University of Groningen. His research is focusing on judicial protection in the European Union. At the occasion of the Dutch general elections, he has kindly accepted to make a guest contribution to the Alliance Europa blog. 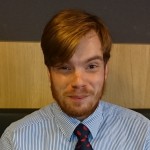 Third post in our series on the Dutch general elections. 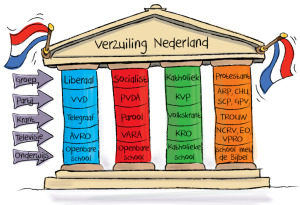 Questions on the vital statistics of ‘The Left’ are rising everywhere in the Western World. At least in the Netherlands, it is too early to organise a wake. We may be well known for our liberal and permissive attitude to society (which is not the same as being tolerant, and is more marketing than truth), but the Netherlands has never truly had a left wing revolution, silent or otherwise. In part due to verzuiling (a Dutch form of mild sectarianism along religious and class lines, sometimes called ‘pillarisation’) and the closely related poldermodel (a system of highly proceduralised consensus-building in government), the welfare state and the economy have always been pragmatically constructed.

Although it has been a long time now since the days of verzuiling, the political spectrum never meandered far from that structure. Any changes that occurred since the 1980’s have by-and-large been within the well-known system. New parties would form, but they would adhere to the left-right spectrum (and until the 80’s, the famous ‘pillars’). In fact, the most significant upstart that advocated system-change, D66, has quickly been encapsulated into the spectrum as the epitome of the middle-of-the-road party. D66 is perhaps the most vivid example of the stolid Dutch political establishment that is reluctant to accept change it cannot qualify. 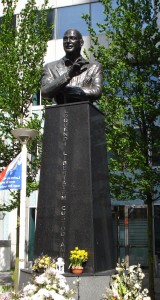 That ended with Pim Fortuyn. A politician that now has an almost saint-like status in Dutch culture as the man who dared to speak out against the ‘The Hague apparatchiks’. The governments before him had been very successful in fostering economic, social, environmental and cultural progress. The so-called ‘Purple Cabinets‘ (Paars I and II) were a mix of liberal and socialist parties, coming together to form progressive-centrist policies. None of the opposition parties offered any real resistance. How could they? Purple policies were progressive enough for the liberals, social enough for the reds and in the time of secular liberalism, the Christian parties were out anyway.

Pim Fortuyn, who was assassinated in 2002, was the first person to find the cracks in this structure. The complicated and not very successful integration of immigrants into society (mainly guest workers brought in over the post-war decades) played into his hands, as did the fact that the political elite that was enjoying its success too much. Fortuyn formed a perfect storm and created a platform for the angry. His party (the LPF) couldn’t be qualified along the lines of Dutch politics. It was right-wing in foreign and migration policies, but with redistributive policies only seen in the most socialist of programmes. Combined with the promise to let ‘people who had business experience’ run the government, it was the first successful anti-establishment party. For ‘The People’, not just a pillar as with the socialist movement.

From 2001 onward, the traditional left-right divide no longer worked as an analytical tool or even a useful form of political expression. Yet, the system has never recovered from the new idea that parties could actually exist outside of the status quo. In the wake of the rise and fall of the LPF, a number of contenders have emerged, each with a mix of left-wing and right-wing policies. This is best exemplified by the successor of Pim Fortuyn, Geert Wilders and his Freedom Party (PVV). With an agenda based on xenophobic screed and anti-elite discourse, the well-spoken former liberal (a scion of former VVD deputy and EU Commissioner Bolkestein) torments both the liberal VVD, and the socialist SP and PvdA. These traditional parties are trying to adapt, incorporating stances heretofore unacceptable to them. The VVD becoming more repressive on law and order, the SP going back to its reactionary socialist roots, and the PvdA still searching for a response.

So what has happened to ‘The Left’?

The truth is that before Fortuyn the old system had led to the adoption of norms in all political parties that would be called ‘Left Wing’ in other countries. The large losses of the Socialist parties is largely due to the fact that they have not been able to find a new cause after most of their policies had been enacted by the 80’s. Even the Christian Democrats advocate a highly organised welfare state, and with ChristenUnie there is even a (moderate) progressive faction. When the old system of Left-Right politics worked, coalitions would be created along familiar lines, even though that sometimes appeared arbitrary. With the crash of that old system of politics, there is no logical flag to rally round for opposition to Wilders and other populists, even though more values are shared. But in effect, almost all other parties condemn the PVV. And although the PVV is ahead in the polls, so are GroenLinks (a Green Party with a liberal streak) and D66 (Progressive Liberals), polar opposites of Wilders.

The Left isn’t dead. In the Netherlands, without ever really coming into power a lot of the traditionally left-wing policies have become an integral part of the political culture. Even with the dissolution of the traditional demarcations by Fortuyn and Wilders, progressive and socialist thought and culture is everywhere in varying degrees. It just can’t be pinned down in the old taxonomy. The current anger at the so-called ‘Progressive Left-Wing Elite’ is therefore mostly a construct of the populists with the objective of giving people something to rage against, based on the old convention of the well-to-do city dwellers that would vote Social Democrats, rather than on something that actually exists. The real questions which the post-election Netherlands will need to ask are therefore: How do we organise our system after the death of the Left-Right spectrum? Will verzuiling eventually be replaced by sectarianism and identity politics?