Early this month I had the fortune to attend the biannual conference of the European Studies Association (EUSA) in Miami. As always, and as it could not be otherwise, I attended as many panels on the European Monetary Union as I could. I also discussed the future of the Euro with a number of colleagues over dinners, lunches and breakfasts. Yes, I admit it, I am a Euro freak. But there are not so many opportunities to discuss this topic with American or America-based scholars, so one needs to make the most of it. 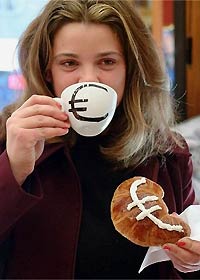 One of the things that I noticed from the previous EUSA conference two years ago in Boston is that the mood on the Euro has changed.

Our Anglo-American colleagues are less gloomy on the single currency, although they are still quite sceptical. Matthias Matthijs is one of them. He showed figures indicating how trust in the democratic system has collapsed over the past years in the Mediterranean countries and claimed that this was due to the Euro straightjacket and the imposition of austerity by Brussels.

Those who follow my publications (or my Twitter account) know that this causality does not convince me. Rather, my sense is that disenchantment with democracy in these countries has more to do with internal factors, mainly corruption and the lack of meritocracy and job opportunities for the young. This is at least the case in Spain, and it is likely to be valid also for Portugal and Greece. In Italy the story might be closer to what Matthijs describes. But yet again, here I believe this is more due to the fact that Italian leaders blame the Euro, Germany and Brussels for Italy’s ills instead of tackling the real problems of their country.

As a matter of fact, the comparison between Italy and Spain demonstrates that the Euro is not an anti-growth device, as sometimes argued. The external circumstances are roughly the same for both countries. Both are in the monetary union and both are told by Brussels that they need to reduce their deficits to shrink their public debt. Both have benefited from the ultra-loose monetary policy of the European Central Bank and the drop of oil prices. But Spain is growing for the third year in a row at more than 3%, while Italy is stuck below 1%. This in itself shows that the Euro does not impede high growth rates. The Baltic countries and Ireland are other examples that contradict this thesis.

Not many have noticed but the fact is that in 2016 the Eurozone had a higher growth rate than the US! This explains why the overall sentiment in the Old Continent, but also in the US has shifted. Those US based scholars that predicted a Euro break-up at the previous EUSA conference in Boston in 2015, admit now that they had underestimated the political will prevalent both in the South and the North of the monetary union to stick together. A sentiment that has only increased after the Brexit vote and the arrival of Donald Trump to the White House.

As Daniela Schwarzer from the German foreign-policy think-tank DGAP explained in a roundtable we had on why the Euro is still so popular, if one looks at the economic side of EMU, one can flirt with the idea of a break-up, but once you analyse the historical and political trajectory of the single currency, then the possibility of an implosion becomes less likely.

Waltraud Schelke, Matthias Matthijs, Vivien Schmidt, Kathleen McNamara and Erik Jones in a panel on the legitimacy deficit of the EU.

However, this does not mean that the Euro is a robust and consolidated construction yet. The good thing about the EUSA conferences is that there are always representatives from the European Central Bank and this year there were some from the ESM (the European Stability Mechanism). Some of them (certainly not all) were complacent, saying that EMU only needs a couple of minor reforms to be sustainably. This is too overoptimistic. There is a reason why Emmanuel Macron is asking for a Eurozone budget to increase investments, a finance minister, and a Eurozone parliament. As I have explained elsewhere, monetary unions do not survive without political unions to underpin them and the earlier European leaders understand that, the better.

Of course, this also means that the analysis on the future of the euro at EUSA conferences will continue to be divided between those who believe that fiscal and political integration is feasible, and likely, and those who don’t. And it happens that the former tend to live and work inside the Eurozone , and the latter look at it from the outside. Only time will tell whether the “insiders” base their analysis on wishful thinking or whether they are closer to the truth than the “outsiders”.

Miguel Otero-Iglesias is Senior Analyst at the Elcano Royal Institute and Research Associate at the EU-Asia Institute at ESSCA School of Management (France).