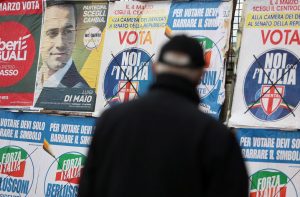 On the 4th of March the election for the next mandate of the Italian Parliament will take place, and once more the political scenario in Italy appears to be chaotic and poor at the same time. Is it because they know that Italian citizens are so tired of politics that certain political parties do not even feel the need any more to provide in their programmes proposals that can be measured in terms of feasibility? Especially with regard to their impact on the public debt, a minimum of realism would have been helpful.

Yet, even without or very little numbers, it is evident that many proposals of the different political groups are not feasible at all. So, what is the basis then of the political debate? Just gut feelings? That’s what it looks like: in Italy candidates often organise their public interventions with the primary intention to demonize the other contenders. Convincing the voters on their own programmes takes second place. It is thus not surprising that appealing to people’s anger is the most common strategy. Note that Italy is not alone, similar strategies could be observed at other recent elections across Europe.

Despite the general lack of contents, the rules and main actors in these elections are worth a look.

The Italian Parliament is composed of two bodies so voters must put a cross on two ballot papers, one for the Chamber of Deputies (630 elective members), and one for the Senate of the Republic (315 elective members – 5 senators for life are not elected), given that in 2016 Renzi’s attempt to reform the Senate did not succeed.

That sounds relatively straightforward, but the new electoral law approved in October 2017 is of remarkable complexity. A mixed system applies: 61% of the MPs will be elected according to proportional representation. 37% of them (as well as all senators) through a first-past-the-post system. The same goes for the remaining 2% reserved for Italians living abroad.

The importance of Italian expatriates should by no means be underestimated: they are close to 5 million people, which is almost equivalent to the number of immigrants (5,3 million), a fact that makes the current surge of racism/xenophobia and anti-immigration feelings in this country even sadder to watch.

Given the fragmented political landscape in Italy and the historical incapacity of governments to get enough support in the Parliament, the idea of the system is to avoid the dispersion of votes among minority parties that a pure proportional system would bring. Nevertheless, the political parties are so far from obtaining a strong majority, that they are forced to build fragile coalitions, which cannot possibly last long after the vote and make the political scenery even more confusing, because persons with very dissimilar ideas run together.

Basically, parties have two options: in the different voting districts they can decide to stand alone – in this case they must obtain at least 3% of votes to win seats – or to constitute a (pre-announced) coalition, in which case the threshold is 10%. One of the novelties is that the new system abolishes the bonus of “automatic majority” for the party/coalition with more than 40% of the vote.

Following the current election polls, the right-wing coalition is the expected winner. This coalition brings together: a) Forza Italia (“Let’s go Italy”), the party of Berlusconi, named, as every European football fan knows, after a rallying cry for the “Squadra Azzura”, with Berlusconi actively campaigning although banned from public office for being convicted of tax fraud; b) Lega Nord (“Northern League”), the xenophobic and previously separatist party of the richer regions in the North, which, for want of votes in the southern regions, recently re-branded their secessionist agenda in terms of “federalism”; c) the post-fascist, nationalist and conservative party Fratelli d’Italia (“Brothers of Italy”, named after the opening line of the national anthem as every European football fan knows), a spin-off from Berlusconi’s party when he got into judicial problems (only that now they are back together). The two latter coalition members are close to the French “Front national” and by definition have a strongly Euro-sceptical attitude.

The second contender in terms of vote preferences would be the Movimento 5 stelle (“Five Star Movement”), an anti-establishment and also anti-EU movement. Now that the Mayor of Rome is a member of the movement, they are themselves involved in mismanagement and scandals in the capital. Moreover, several controversial statements of its members are a source of concern for a possible authoritarian, perfectly illiberal drift, such as their request to ban from the profession journalists that wrote against them and that were “listed”.

Finally, there is the left, which is definitely not in good shape. Besides Renzi’s Partito Democratico (Democratic Party), it includes Liberi e uguali (“Free and Equal”), a party established in 2016 by left-wing dissidents after the political defeat of Renzi’s Constitution reform proposal in the referendum. They aimed at attracting citizens that were disappointed by Renzi and his government, but this party is neither fresh nor new: it is composed by old politicians, and by contributing to the fragmentation of the left, it actually increases the chances of the right or the Five Star Movement to win.

In this context, the surge of a liberal, centrist and strongly pro-EU movement such as “En Marche !” in France would be desirable, but is not likely. The new movement +Europa (“More Europe”, pronounced “pew-europa”) led by Emma Bonino was established too late (November 2017) and does not seem to have enough strength.

So this is where we stand. Are the opinion polls trustworthy? A high number of voters has not yet taken any decision, and there is the risk of a very high level of abstention. Since it is not allowed to publish opinion polls in the last two weeks of campaign, the result may completely change from the picture above mentioned. Whatever the result, it is unlikely that Italy will be able to get a government supported by a large majority and thus capable to last, in line with the historical trend (more than 60 governments since 1946, when the Republic was established).

Everybody realises that governmental instability remains a big obstacle to the reboot of the Italian economy and, perhaps even more importantly, society. Yet it seems impossible to shake up the system. Sliding slowly, inevitably, into durable decline, eyes wide open, but without a Macron in sight – is that the Italian destiny of the next decade?

This post was initially published in German
by the Berlin-based think-tank Zentrum Liberale Moderne.

Antonella Forganni is head of the Department of Management and Corporate Environment at ESSCA, and a researcher at the EU-Asia Institute.

View all posts by Antonella Forganni →