Heidi Maurer is LSE fellow in EU and International Organisations. Previously she held a position as assistant professor at Maastricht University. Heidi is interested in the different dimensions of the European Union's foreign policy, but also a recognised expert in teaching and learning. 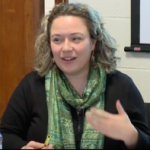 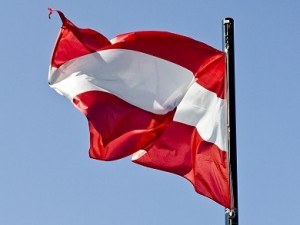 Most non-Austrian react with bewilderment when they take note of the forthcoming Austrian elections on 15 October: elections, now? Have they not just voted?

Indeed. On 4 December 2016 Austria had to re-run its presidential elections, with the quasi-Green candidate Alexander van der Bellen winning by a really small margin of 50.3% against Norbert Hofer, the candidate of the (very) right-wing FPÖ. Even though presidents play a marginal role in everyday Austrian politics, this battle of ideas attracted much international attention.

What is happening next Sunday, 15 October 2017, is actually more important. Early elections for parliament have been scheduled, and they are very likely to follow the trend towards the right, which was visible in the recent German elections. 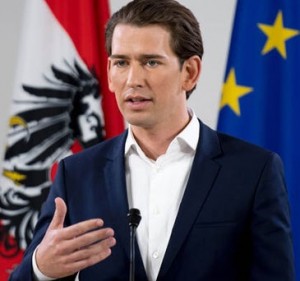 In May 2017, the governmental coalition of Social Democrats (SPÖ) and the Conservative Party (ÖVP) decided to support the request submitted by the opposition in parliament and call for early elections. At this point, not much love was left between the two coalition partners, after months of conflict and open disagreement. The resignation of the ÖVP party chair and Vice-Chancellor Reinhard Mitterlehner gave the last push for the break-up of the coalition, undermined by internal fights within both parties. The ÖVP begged their young and successful foreign minister Sebastian Kurz, boosted by incredible approval rates in opinion polls, to take over the role as party chair. Kurz gracefully accepted, but only under his own conditions, such as full autonomy in staff matters and running under the label ‘List of Sebastian Kurz – the new ÖVP’ (instead of simply “ÖVP”). 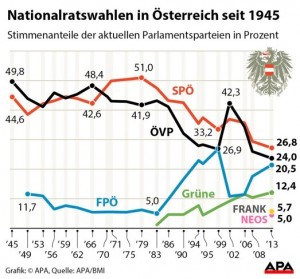 That is the main tenor of the current political discourse. Citizens are fed up with the idea of yet another boring, fighting, stagnating Grand Coalition of the two major traditional parties. What in September 2013 had seemed like the lesser evil – as compared to another FPÖ participation in government after the one in 1999 which had raised so many eyebrows and even sanctions within the EU), turned into a permanent bickering between two government parties openly fighting each other’s policies over the past year. Not ideal for realizing the objective of winning back citizens’ trust, after the 2013 results had already been the worst ever for both SPÖ and ÖVP in the Second Republic.

Not to mention the scandals!

Scandals are the second main issue currently associated with the election campaign. To everybody’s surprise, it is not the usual suspect (the far-right FPÖ) that breaches with acceptable practices, but the big coalition parties SPÖ and ÖVP! All throughout the campaign, they have been navigating from one scandalous ‘Breaking News’ to the next. The tip of the iceberg is the ‘facebook scandal’ that transpired within the SPÖ last week: a few weeks ago the SPÖ campaign advisor Tal Silberstein (an Israeli consultant) was fired due to allegations of money laundering. When journalists started investigating Silberstein´s practices, they discovered dirty campaigning on social media on an unimagined scale. Silberstein had set-up a whole office (interestingly enough staffed with collaborators close to the conservative party) that ran two facebook groups apparently in support of the ÖVP rival Kurz, but then discrediting the ÖVP party leader with disdainful, personal attacks. The SPÖ election campaign manager resigned immediately, although the SPÖ leadership is still claiming that they were not informed about those practices. The question remains how much SPÖ party leader and Chancellor Kern knew about these practices. And the general conclusion is that even if he did not know, it was his job to know (especially if he wants to lead this country).

Other, smaller scandals shake the political establishment on a daily basis: how come the ÖVP has been using campaign slogans that had been initially developed but not publicized by the SPÖ? At the same time, the Greens’ prospects have been damaged by internal quarrels, which had one of their longest-serving members, Peter Pilz, leave the party to create his own list in opposition to Green party leaders.

The one positive side effect of the 2017 election campaign is that parties are forced to be clear on their main policy priorities.

SPÖ Chancellor Kern, stemming from the business-section of the Social Democrats, is considered a calm, well-respected and experienced intellectual. During the last year, the SPÖ was tempted internally to consider a coalition with the FPÖ, but Kern and his team managed to re-focus it on its core topic: sustainable state institutions that ensure a just, fair and protective society through state intervention. Just how this is a shift from what the SPÖ government was supposed to be doing over the last years, is less clear, although some observers point out that the SPÖ became more edgy in pursuing social-democratic economic policies lately.

Sebastian Kurz and his ‘new’ ÖVP, on the other hand, are pushing the idea of breaking up old state and party structures to bring in a ‘new social justice’. The latter is defined by enabling hard-working Austrians to be able to make a living for themselves; by getting rid of too much regulation and state intervention; and mostly by cutting off ‘benefits parasites’ (and foreigners) from state support. Kurz is slightly less eloquent in providing details of how exactly he would achieve his declared goals. In the latest TV debates he resorted to bashing European politics and other European leaders´ decisions (read: Merkel´s refugee policy) for their negative impact on Austria, instead of providing clear policy strategies himself. 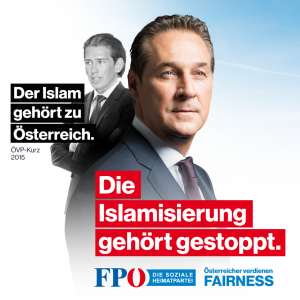 The FPÖ and their party leader Heinz-Christian Strache have one clear priority: Austria for Austrians (translation: kick migrants out of Austria!). Strache keeps attacking Kurz for not having reacted more decisively in closing Austrian borders during the Syrian refugee crisis, while for the rest the two-party leaders showed so much unity in the TV debates that many observers already refer to the ‘Chancellor and his Vice-Chancellor to be’.

In the current political climate, marked by a clear shift of the main parties towards the right, the Greens are the last party on the left of the political spectrum. In economic, societal and European topics they stand for clear left-wing positions, and they are the only party that has climate change and environmental impact high on their agenda. The economic-liberal NEOS still confuse voters with the variety of their positions, but they earned some respect for having many experienced entrepreneurs in their ranks. And they got the presidential candidate and respected lawyer Irmgard Griess on their party list, which provided them with visibility.

So, what are the expectations? 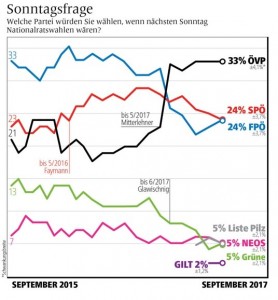 The latest polls confirm the trends of the last years: the ÖVP is expected to get a boost by its charismatic young party leader. Sebastian Kurz is appreciated by many Austrians for his youth, his image as everybody’s perfect ‘son-in-law’, and his promise for change (even though most people do not seem to care or realize that the promised change is likely not to be in their favour). The ÖVP thus clearly leads the polls. What is unclear at the moment, is who will come second: will the FPÖ manage to overtake the SPÖ?

What the polls show quite clearly, though, is that there will be a very meager amount of coalition options available: the visible disdain that emerged between Kurz and Kern in the past months makes a revival of the Grand Coalition impossible. For the ÖVP, Kern would have to step down for the SPÖ to even being considered a potential partner. More likely is a coalition ÖVP-FPÖ, although this will also depend on whom the president (one of his rare powers!) will mandate with forming a government.

The expected center-right victory at these parliamentary elections will not come as a surprise. Like in Germany, the Social Democrats have lost profile by participating in the Grand Coalition. Like in Germany, the political discourse has been continuously shifting towards the right over recent years: the moderate right takes ever tougher positions on migration issues, and the Social Democrats sometimes follow suit in fear of alienating too many worried voters.

The SPÖ is only just starting to pull back to the left, but with the considerably weakened Greens left as only partners, a center-left coalition is simply not realistic this time around.